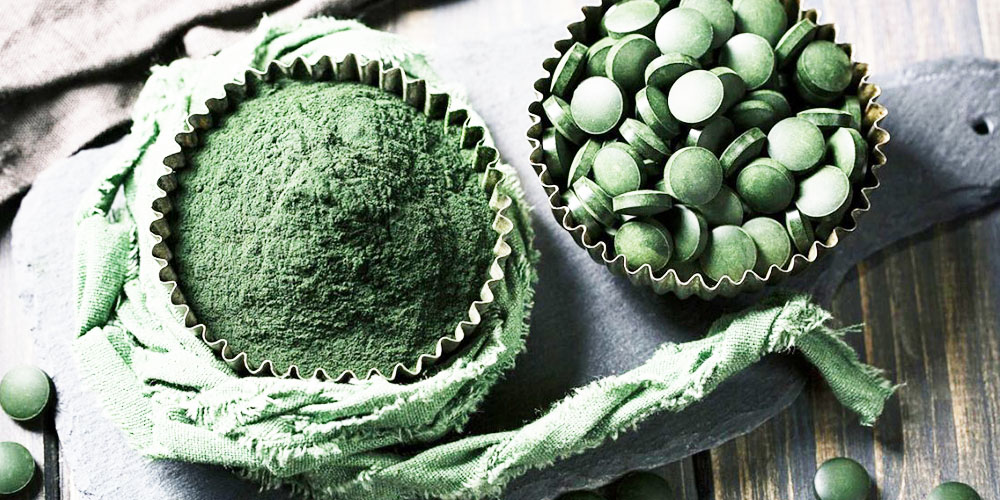 Spirulina is among the world’s most popular supplements.

It is loaded with various nutrients and antioxidants that may benefit your body and brain.

1. Spirulina Is Extremely High in Many Nutrients

Spirulina is an organism that grows in both fresh and saltwater.

It is a type of cyanobacteria, which is a family of single-celled microbes that are often referred to as blue-green algae.

Just like plants, cyanobacteria can produce energy from sunlight via a process called photosynthesis.

Spirulina was consumed by the ancient Aztecs but became popular again when NASA proposed that it could be grown in space for use by astronauts.

A standard daily dose of spirulina is 1–3 grams, but doses of up to 10 grams per day have been used effectively.

This tiny alga is packed with nutrients. A single tablespoon (7 grams) of dried spirulina powder contains:

In addition, the same amount holds only 20 calories and 1.7 grams of digestible carbs.

Gram for gram, spirulina may be the single most nutritious food on the planet.

A tablespoon (7 grams) of spirulina provides a small amount of fat — around 1 gram — including both omega-6 and omega-3 fatty acids in an approximately 1.5–1.0 ratio.

The quality of the protein in spirulina is considered excellent — comparable to eggs. It gives all the essential amino acids that you need.

It is often claimed that spirulina contains vitamin B12, but this is false. It has pseudo vitamin B12, which has not been shown to be effective in humans.

SUMMARY: Spirulina is a type of blue-green algae that grows in both salt and fresh water. It may be one of the most nutrient-dense foods on earth.

Oxidative damage can harm your DNA and cells.

This damage can drive chronic inflammation, which contributes to cancer and other diseases (5).

Spirulina is a fantastic source of antioxidants, which can protect against oxidative damage.

SUMMARY: Phycocyanin is the main active compound in spirulina. It has powerful antioxidant and anti-inflammatory properties.

Phycocyanin can help to fight free radicals and inhibit the production of inflammatory signaling molecules which provides antioxidant and anti-inflammatory effects.

Heart disease is the world’s leading cause of death.

Many risk factors are linked to an increased risk of heart disease.

As it turns out, spirulina positively impacts many of these factors. For example, it can lower total cholesterol, “bad” LDL cholesterol, and triglycerides, while raising “good” HDL cholesterol.

In a study in 25 people with type 2 diabetes, 2 grams of spirulina per day significantly improved these markers.

Another study in people with high cholesterol determined that 1 gram of spirulina per day lowered triglycerides by 16.3% and “bad” LDL by 10.1%.

Several other studies have found favorable effects — though with higher doses of 4.5–8 grams per day.

Fatty structures in your body are susceptible to oxidative damage.

This is known as lipid peroxidation, a key driver of many serious diseases.

For example, one of the key steps in the development of heart disease is the oxidation of “bad” LDL cholesterol.

Interestingly, the antioxidants in spirulina appear to be particularly effective at reducing lipid peroxidation in both humans and animals.

In a study in 37 people with type 2 diabetes, 8 grams of spirulina per day significantly reduced markers of oxidative damage. It also increased levels of antioxidant enzymes in the blood.

SUMMARY: Fatty structures in your body can become oxidized, driving the progression of many diseases. The antioxidants in spirulina can help prevent this.

5. May Have Anti-Cancer Properties

Some evidence suggests that spirulina has anti-cancer properties.

Research in animals indicates that it can reduce cancer occurrence and tumor size.

Spirulina’s effects on oral cancer — or cancer of the mouth — have been particularly well studied.

Among those who took 1 gram of spirulina per day for one year, 45% saw their lesions disappear — compared to only 7% in the control group.

When these people stopped taking spirulina, almost half of them redeveloped lesions in the following year.

In another study of 40 individuals with OSMF lesions, 1 gram of spirulina per day led to greater improvement in OSMF symptoms than the drug Pentoxifylline.

High blood pressure is a condition in which long term force of the blood against your artery walls is high enough that it eventually causes health problems such as heart diseases and more.

While 1 gram of spirulina is ineffective, a dose of 4.5 grams per day has been shown to reduce blood pressure in individuals with normal levels.

This reduction is thought to be driven by increased production of nitric oxide, a signaling molecule that helps your blood vessels relax and dilate.

SUMMARY: A higher dose of spirulina may lead to lower blood pressure levels, a major risk factor for many diseases.

Allergic rhinitis is characterized by inflammation in your nasal passageways.

It is triggered by environmental allergens, such as pollen, animal hair or even wheat dust.

Spirulina is a popular alternative treatment for symptoms of allergic rhinitis, and there is evidence that it can be effective.

In one study in 127 people with allergic rhinitis, 2 grams per day dramatically reduced symptoms like nasal discharge, sneezing, nasal congestion and itching.

8. May Be Effective Against Anemia

There are many different forms of anemia.

The most common one is characterized by a reduction in hemoglobin or red blood cells in your blood.

Anemia is fairly common in older adults, leading to prolonged feelings of weakness and fatigue.

In a study of 40 older people with a history of anemia, spirulina supplements increased the hemoglobin content of red blood cells and improved immune function.

Keep in mind that this is just one study. More research is needed before any recommendations can be made.

SUMMARY: One study suggests that spirulina can reduce anemia in older adults, though more research is needed.

9. May Improve Muscle Strength and Endurance

Exercise-induced oxidative damage is a major contributor to muscle fatigue.

Spirulina appears beneficial, as some studies pointed to improved muscle strength and endurance.

In some cases, it has outperformed popular diabetes drugs, including Metformin.

There is also some evidence that spirulina can be effective in humans.

In a two-month study in 25 people with type 2 diabetes, 2 grams of spirulina per day led to an impressive reduction in blood sugar levels.

HbA1c, a marker for long-term blood sugar levels, decreased from 9% to 8%, which is substantial. Studies estimate that a 1% reduction in this marker can lower the risk of diabetes-related death by 21%.

However, this study was small and short in duration. More studies are necessary.

Spirulina is a type of cyanobacteria — often referred to as blue-green algae — that is incredibly healthy.

While more research is needed before any strong claims can be made, spirulina may be one of the few superfoods worthy of the title.