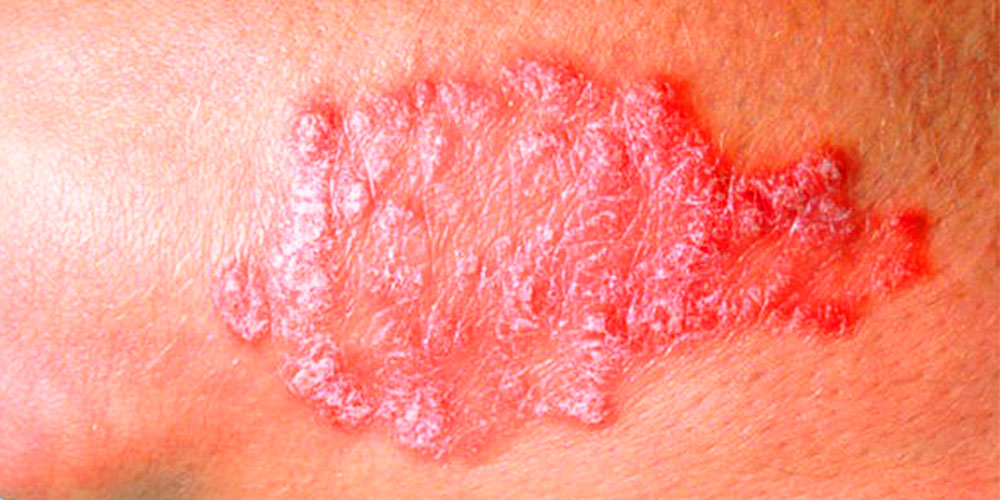 Psoriasis is a chronic skin disorder. It’s considered an autoimmune disease. This means your immune system harms your body instead of protecting it. Around 7.4 million people in the United States have this condition.

Psoriasis causes your skin to develop scaly patches that are sometimes silvery or red and can be itchy and painful. The patches can come and go over the course of a few days to over a month.

What Are The Symptoms of Psoriasis?

The most common symptoms of psoriasis include:

Psoriasis can also cause symptoms of mental stress, anxiety, and low self-esteem. Depression is also common with people who have psoriasis.

There are also subcategories of psoriasis types. These appear differently depending on the location of the body. Psoriasis is not contagious regardless of type.

Plaque psoriasis, or psoriasis vulgaris, is the most common form of psoriasis. An estimated 80 to 90 percent of people with psoriasis have plaque psoriasis. It’s characterized by thick red patches of skin, often with a silver or white scaly layer.

These patches often appear on the:

Patches are usually 1 to 10 centimeters wide, but can also be larger and cover more of the body. If you scratch at the scales, the symptoms will often get worse.

As a way to ease discomfort, your doctor may recommend applying moisturizers to keep the skin from becoming too dry or irritated. These moisturizers include an over-the-counter (OTC) cortisone cream or an ointment-based moisturizer.

Your doctor may also work to identify your unique psoriasis triggers, including stress or lack of sleep.

Other treatments may include:

In some cases, you may need light therapy. This involves exposing the skin to both UVA and UVB rays. Sometimes treatments combine prescription oral medications, light therapies, and prescription ointments to reduce inflammation.

With moderate to severe cases, you may be prescribed systemic medication in the form of oral, injectable, or intravenous medication.

Guttate psoriasis appears in small red spots on the skin. It’s the second most common type, affecting around 8 percent of people with psoriasis. Most of the time it starts during childhood or young adulthood.

Guttate psoriasis happens after certain triggers. These triggers include:

Flexural or inverse psoriasis often appears in skinfolds, such as under the breasts or in the armpits or groin area. This type of psoriasis is red and often shiny and smooth.

The sweat and moisture from skinfolds keeps this form of psoriasis from shedding skin scales. Sometimes it’s misdiagnosed as a fungal or bacterial infection. The skin-on-skin contact can make inverse psoriasis very uncomfortable.

Most people with inverse psoriasis also have a different form of psoriasis in other places on the body.

Your doctor may prescribe a lower potency steroid cream to avoid your skin from thinning too much. You may also benefit from taking or applying medications that reduce yeast or bacteria growth.

Pustular psoriasis is a severe form of psoriasis. It develops fast in the form of many white pustules surrounded by red skin.

Pustular psoriasis may affect isolated areas of the body, like the hands and feet, or cover most of the skin’s surface. These pustules can also join together and form scaling.

Some people experience cyclic periods of pustules and remission. While the pus is noninfectious, this condition can cause flu-like symptoms such as:

There are three kinds of pustular psoriasis:

Each of the three forms of pustular psoriasis can have different symptoms and severity.

Treatment may include OTC or prescription corticosteroid creams, oral medications, or light therapy. Biologics may be recommended as well.

Identifying and treating the underlying cause may also help reduce reoccurrence of pustular psoriasis.

Erythrodermic psoriasis, or exfoliative psoriasis, is a rare psoriasis type that looks like severe burns. The condition is serious, and can be a medical emergency. You may need hospitalization because your body may not be able to control body temperature.

This form of psoriasis is widespread, red, and scaly. It may cover large portions of the body. Exfoliation often occurs in larger pieces than the small scales typical to most psoriasis.

Erythrodermic psoriasis can develop from:

A person with this condition often needs hospital attention. At the hospital, you’ll receive a combination of therapies.

This can include an application of medicated wet dressings, topical steroid applications, biologics, or prescription oral medications until symptoms have improved.

Make an appointment with your doctor if you think you have erythrodermic psoriasis.

Psoriatic arthritis (PsA) is a painful and physically limiting condition that affects between 30 and 33 percent of people with psoriasis. There are five types of PsA with varying symptoms. There is also no cure for this condition.

Because psoriasis is an autoimmune disease, it can trigger the body to attack the joints and the skin. It can affect many joints and often becomes quite severe in the hands. Skin symptoms usually appear before joint symptoms.

Treatments for psoriatic arthritis can include nonsteroidal anti-inflammatory drugs (NSAIDs), such as ibuprofen (Advil) and naproxen sodium (Aleve). NSAIDs can help reduce the incidences of swelling and pain associated with psoriatic arthritis.

Although not an official type of psoriasis, nail psoriasis is a manifestation of psoriasis. The condition can often be confused with fungal infections and other infections of the nail.

Nail psoriasis can cause:

Sometimes the nail can even crumble and fall off. There is no cure for psoriatic nails, but some treatments may improve the health and appearance of nails.

Treatments for nail psoriasis are like the ones used for plaque psoriasis. It may take time to see the effects of these treatments as nails grow very slowly. Treatment options include:

Scalp psoriasis is common in people with plaque psoriasis. For some people, it may cause severe dandruff. For others, it can be painful, itchy, and very noticeable at the hairline. Scalp psoriasis can extend to the neck, face, and ears in one large patch or many smaller patches.

In some cases, scalp psoriasis can complicate regular hair hygiene. Excessive scratching can cause hair loss and scalp infections. The condition may also cause feelings of social stress.

Topical treatments are most commonly used for scalp psoriasis. They may require an initial two months of intensive applications, plus permanent, regular maintenance. Treatment options include:

Light therapy, oral medications, and biologics also may be recommended depending upon the responsiveness to treatment.

Although there is no one cure for any form of psoriasis, remission and significant healing is possible. Your doctor will work with you to create a treatment plan that helps manage your condition. You can also take steps at home to manage psoriasis.

Doctors may slowly build up to the most effective treatment plan for your psoriasis symptoms. Most start with a topical or light therapy treatment and only progress to systemic medications if the first line of treatment is unsuccessful.

Stress, anxiety, depression, and other mental health disorders can be side effects of psoriasis. You may benefit from therapy or support groups where you can meet other people experiencing similar issues or concerns.

You can also talk with your healthcare provider about seeing a therapist who has experience with psoriasis. They’ll be able to help identify ways to cope.

There are different types of psoriasis that present different symptoms. While there’s no cure for psoriasis, treatment can help relieve and manage your symptoms. Talk to your doctor if you’re concerned about your skin.

The type of psoriasis you have, and its severity, will determine your treatment. Generally speaking, milder cases with smaller psoriasis patches can often be treated topically. More serious cases, with larger patches, may require systemic treatment.

Many people believe that psoriasis is contagious, but it won’t spread from person to person. Researchers believe that a combination of genetics, and environmental and immune system factors cause psoriasis.

Thanks to the advocacy work of dozens of psoriasis activists and organizations, psoriasis is also gaining more support and awareness. Talk to your doctor if you believe you have psoriasis. They’ll be able to provide treatment options and coping methods.HEALTHLINE NEWSLETTERGet our weekly Psoriasis email

To help you feel your best, we’ll send you lifestyle tips, guidance on dealing with flare-ups, treatment options, and more.